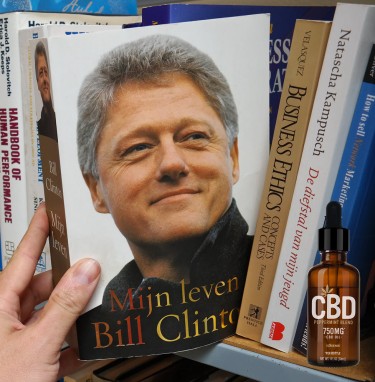 Recently Marijuana Moment reported on an article that covered some of Bill Clinton’s comments on CBD which he spoke at an event called “Impact Forum” which was hosted in Orlando. Allegedly, in this article Clinton spoke in favor of CBD saying that, “it can help with pain”.

However, after the original publishers of the article were contacted by the Clinton PR team, they removed the article. You can read the ACHIVED VERSION HERE.

In this article, the former president said,

“I try not to answer any of those hype calls but I get more messages about CBD than any man alive. Go figure. There is some evidence that you can get CBD with a low-THC count that will combat pain. Some of these products have been tested more or less to FDA standards and some [haven’t been tested] not at all.”

What Marijuana Moment pointed out was the hypocrisy of Clinton who, while he admitted to smoking cannabis on one or two occasions, never “inhaled” and during his stint as president of the United States, also threatened to revoke doctor’s federal licenses to anyone who recommended medical cannabis. Additionally, Marijuana Moment also mentioned that he did seem more enthusiastic about cannabis at the end of his presidency.

Nonetheless, it seems that Clinton has opened up to the idea of cannabis-based medicine and even chimed in on the notion of THC caps (which is totally an establishment talking point)

“We need to have a national standard of the THC count of these products and what the tests show. NYU Langone does some of this testing and CBD could be a viable outlet for pain relief. We could potentially not lose so many people,” Clinton said.

But we can never corroborate whether this is true or not, because the Clinton PR group reached out to the publisher and requested them to remove it.

“It was all quoted accurately and live—it was pressure from the Clinton camp PR team that the comments were supposed to be closed to the press—so we respected the writers request,” a Cannabis & Tech Today editor wrote to Marijuana Moment in a Twitter direct message.

According to the Impact Forum representative who reached out to Marijuana Moment, “No press were authorized to attend this panel,” she said. “We cannot verify how the content was obtained nor confirm quotes.”

The Problem with News these days…

Of course, every forum has a right to be a “private event”, however, the fact that the Clintons PR team could simply pressure a publisher to remove an article illustrate a greater problem. The problem that the news is subject to the whims of the elite. The Clintons are deeply entrenched in the status quo and have a long history of “aggressive behavior” which has led some to even create the Clinton Death Toll, which is a list of people who have worked for the Clintons and died under mysterious circumstances after their employment ended – typically because they were whistleblowers and the likes.

I’m not saying that it’s true – I’m just pointing out that the hawkish nature of the Clintons make a “Death list” a plausible possibility.

The point is, this powerful family has the ability to influence how the news is being presented, or simply get a publisher to remove an article if they see fit. If the publisher would have refused, I’m sure they would have been slapped with lawsuits and other legal maneuvers to hinder the operations of the publisher.

However, the Clintons aren’t the only people who are playing this game. How many other influential people alter the way that the news is reported on them, or simply buries a story or attacks the personal character of their critics? Let me put it to you this way, Ghislaine Maxwell was convicted of sexually trafficking minors for Jeffrey Epstein who only wined and dined the most affluent of society and hosted illegal pedophilic activities on his island – yet we still have no idea who the clients were. Allegedly, Ghislaine trafficked only for Epstein, even though names like Prince Andrew and Bill Gates were some of the people who were frequenting with Epstein.

The point being that we hardly heard anything about this on the news. The coverage of the trial was abysmal by the mainstream media and I’m sure that most of you reading this didn’t know that she’s trying to appeal this conviction by Jury and get a new trial.

Furthermore, if you look into the legal team of the prosecution and cross reference it with the entire history of Jeffrey Epstein – everything seems off.

Only You must obey the law…

While we’re sold the idea that we are equal under the law…some people are simply “more equal” than others to quote Napoleon from Animal Farm.  The fact of the matter is that when you compare the punishment for the level of crimes committed by the average citizen and the sheer amount of power the elite has over the narrative – it doesn’t take a rocket scientist to understand that we live in a two-tiered society.

The lines of division isn’t between men and women, nor between the hue of your skin, your sexual preference or any of these kinds of “definers” – it’s like George Carlin said, “It’s a big club – and you ain’t in it!”

The Bill Clinton PR editing of the News is just another piece of evidence to remind you that “George was right!”

THE CLINTONS ON WEED, READ MORE…

Break Your Bowl? – How to Make a Glass Smoking Pipe at Home (DIY)