Want to Try Cannabis Concentrates But Don’t Know Where to Start?


Cannabis concentrates have been getting more popular over the last few years because of their incredible potency, which you can’t find in other cannabis products.

But with the staggering amount of concentrate types in the market, navigating it can be overwhelming for a first timer. Whether you are a medical marijuana patient or a recreational user, there are many benefits to using concentrates most especially the fact that you need significantly less to feel its effects, and it can save you money.

Concentrates is actually a broad term to refers to many cannabis product types but one thing they all have in common is that it is a type of cannabis that’s been processed to a type of concentrate form. The single most common and widely used concentrate out there are the vape cartridges, but there are just so many more that you can explore.

More people are turning towards concentrates as opposed to traditional flower just because of their potency. You can also consume them in so many different ways: dab it, smoke it, and even eat it. But no matter which concentrate you decide to go with, it’s always critical to remember that you should start slow. It is seriously potent and it’s far too easy to get too high that it could actually ruin the experience. Gradually work your way up until you know the right dose that works for you.

Having said that, here are the best concentrates for beginners to try:

The trichomes of the cannabis flower are where you can find the biggest concentration of THC as well as CBD and other terpenes. You can make your own kief if you have a 3-piece grinder; the third component is critical for collecting the flower leftover, which is essentially what kief is. Then once you have it, you can mix the kief or sprinkle it into your joint or bowl. However, if you want to make it even more potent, press it to create hash which you can smoke on its own.

Shatter is easily recognizable because it looks like glass, and it has an amber or yellowish color. It’s created by covering cannabis buds with butane or another solvent, afterwhich it goes through purging to get its texture. You can consume shatter by using a vaporizer made specifically for concentrates, though more seasoned users turn to dab rigs to get the most out of its potency. Again, since shatter contains high THC levels, you don’t need much for a strong high.

For beginners, shatter can be beneficial since you can break it apart into smaller pieces suitable for dabs.

Depending on the extraction process, hash varies in color and shape. Hash is highly recommended for beginners because it’s milder. While some concentrates can have THC levels of 80% or 90%, hash ranges from 30% to 60%. Another reason why hash is more appealing to first-time cannabis concentrate consumers is that it’s easy to use: it crumbles when it’s lit using a lighter, so you can just take the smaller pieces and add them to bowls or joints.

Some people like to mix it with cannabis flower or even tobacco. But some vaporizers in the market allow you to smoke hash for a smooth, strong kick. There are also many varieties of hash in the market including pressed ice hash and bubble hash to name a few.

Budder is consumed through dabbing since this process enhances its potency. However, there are some cannabis users who prefer to sprinkle them on top of a blunt or bowl, though it can also be vaped.

The drying and curing phase of cannabis usually ends up losing most of its flavorful and fragrant terpenes, which are responsible for its taste and flavor. But making live resin means that these steps are skipped entirely so you can truly enjoy delicious flavor when vaping resin.

Many people are afraid of trying concentrates. However, there really is no reason that you should be afraid of them as long as you start small and slow. With this guide, we hope we’ve helped you narrow down the ideal concentrates to start your journey with.

MORE ON CONCENTRATES, READ THESE… 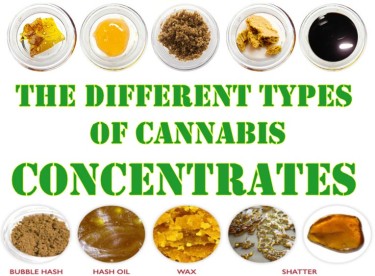 CANNABIS CONCENTRATES BROKEN DOWN BY CATEGORY! 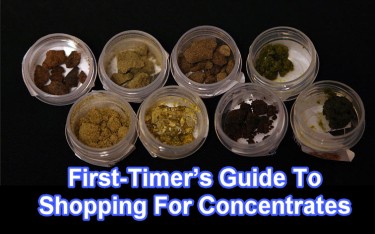 FIRST TIME CONCENTRATES – WHAT SHOULD BEGINNERS DO?