What is the Entourage Effect and Why is It So Important? 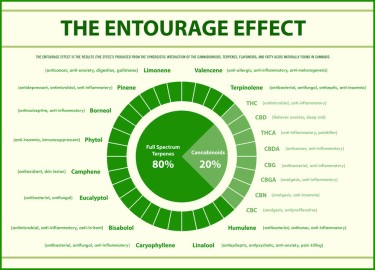 What is the entourage effect? Well, it’s not what you get when you become a big Hollywood celebrity. So it’s got nothing to do with the old hit tv show of the same name.

Perhaps you have heard all the trendy talk about CBD and THC. Perhaps you have even heard the term ‘entourage effect’ being thrown about. It is important first to understand the difference between THC and CBD.

THC stands for TetraHydroCannabinol while CBD is short for CannaBiDiol. Both are compounds produced within the cannabis plant. In fact, there are many different compounds found in the plant, which scientists are just starting to discover and explore now.

These compounds include terpenes. Terpenes are responsible for the unique smell and taste of different strains. Terpenes are not just found in the cannabis plant. They are found in common fruits and vegetables also, including mangoes, for example.

Terpenes play a major role in the entourage effect, which will be explained in a moment. Different terpenes can produce different effects. For example, Guaiol, which has a piney aroma, has antioxidant and antiparasitic properties. Myrcene, the terpene found in mango, has been linked with the mythical ‘couch-lock’. Linalool, which is also found in lavender, helps with depression and anxiety.

Terpenes can also be identified through the link between their name and their characteristics. For example, a terpene called Alpha-Pinene is found in pine trees and strains containing this terpene often have a oodsy, pine aroma. Similarly, strains containing limonene tend to lean to the citrus-y side. Makes it easy to remember!

That was a digression. Back to the differences. Basically THC is the compound that contains psychoactive properties, while CBD produces many of the same results, without the psychoactive side effects. This is key to understanding the Entourage Effect.

That the human body is already well equipped to accept the compounds found in the cannabis plant? It’s true. Inside our mortal coil beats the endocannabinoid system.

The endocannabinoid system was discovered only recently. Basically, your body contains two receptors named CB1 and CB2 which are used to regulate homeostasis. Compounds found in the cannabis plant bind to one or both of these receptors.

The CB1 receptors are found in the central nervous system and the brain. CB2 receptors are located mostly in the digestive and immune systems

It is believed that the endocannabinoid system regulates sleep and anxiety, stimulates a healthy appetite, helps both focus and recovery, and regulates inflammatory and neuropathic pain.

The term ‘Entourage Effect’ was first coined by Dr. Ethan Russo in 1999, in his published study ‘Taming THC’. To put it simply, the ‘Entourage Effect’ is a theory which posits that CBD and THC, working in tandem, can mitigate and compliment, even strengthen, each other’s effects.

Now we come back to the compounds. Here is a list of just some of the many compounds found in the cannabis plant:

Most of these compounds, excluding flavonoids and terpenes, are referred to as cannabinoids. Terpenes have been explained. But what are flavonoids? Flavonoids are a group of phytonutrients that aren’t just found in cannabis, but also throughout the plant kingdom, much like terpenes.

The idea is that the more you mix and match these compounds, cannabinoids, flavonoids and terpenes, the more effective they will be.

What Are The Benefits Of Having An Entourage?

The healing properties of the different compounds, terpenes and flavonoids found in the cannabis plant are still being evaluated. On the whole, CBD and THC have been found to effectively treat a variety of afflictions. Combining CBD and THC may make the treatment even more effective.

Effects and benefits vary from compound to compound. For example, evidence suggests flavonoids can:

Terpenes and flavonoids are both classified as ‘secondary compounds’.

The reason for the entourage effect has to do with the interaction between the compounds and the endocannabinoid system. See, it’s all coming together now! Pun not intended.

That was a chunk! Sounds a little scientific, indeed. Basically, what it means is that for example, when limonene is working in combination with other cannabinoids, the potential of it’s anti-inflammatory and immune regulating properties is increased. Another example is pinene, which in combination with THC and CBD, may help combat the side effect of memory loss or impairment associated with overconsumption.

Following? This brings us to isolates, broad, and full spectrum.

Here are some quick definitions of the aforementioned terms:

Effective ways to consume compounds and cannabinoids for the entourage effect include CBD hemp flower, tinctures, gummies and infused beverages.

There is much more to learn about the Entourage Effect. Some controversy exists as to whether the entourage effect is a real thing or just a marketing trick. Hopefully this article has been a good jumping off point for you.

Keep in mind a couple tips:

Enjoy your entourage, may it bring you sweet re-leaf!

MORE ON THE ENTOURAGE EFFECT, READ THESE… 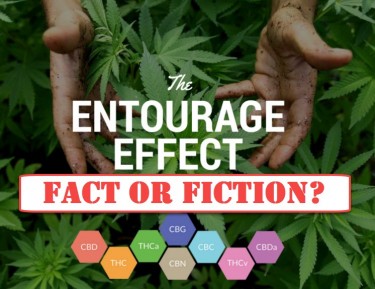 IS THE ENTOURAGE EFFECT REAL OR MADE UP? READ HERE! 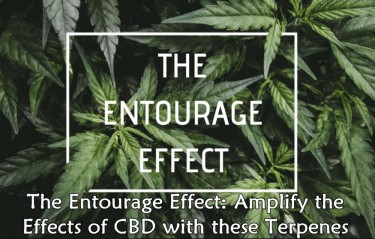 HOW DO YOU AMPLIFY THE ENTOURAGE EFFECT, CBD!

Sonoma County, California Drops Taxes by Nearly Half in Bid to Save Cannabis Farmers

Why Does Getting High Make Some People Faint? (And Can You…