Remember the Time We Got the Whole Family Stoned on ‘Vegan Butter’? 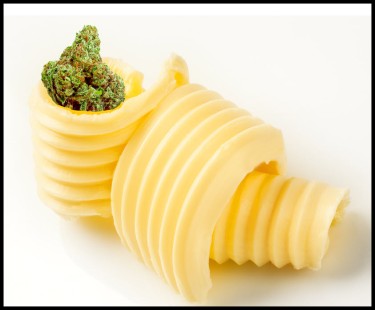 That time we got the whole family stoned with “vegan butter”…

When my brother and I were younger, we once got our entire family stoned. We made a stew which had a special herb mixed into it. We didn’t even decarb the weed, we just tossed it in along with some other spices and let it cook for a while.

The family ate the food, which included my mother, my aunt, and my sister – and of course my brother and I. Right before the proverbial shit were to hit the fan, I decided to not see the aftermath and bailed to a friend’s house.

My brother would subsequently send me updates about how everybody was tripping balls. It wasn’t until my mother called me crying and laughing that she asked me whether the food was spiked…I didn’t say a word. All I told her was that it was going to be okay and that she simply needs to relax.

I was a teenager – she was a grown woman and she was losing her shit.

That day I learned the valuable lesson that dosing people without their knowledge is an asshole move. We eventually confessed to what happened and were rightfully punished for our asinine act.

It seems however, that this is something that isn’t an isolated event. Mark me surprised when I came across a Reddit post where the Redditor explains how his family ate his entire stash of cannabutter.

This is probably one of the best Threads you’ll ever read – so brace yourself…it’s about to get real. And it definitely resonated with the story I just told. Here we go; My comments will be in bold

Guys my naive mother used my CANNABUTTER to make dinner with. Apparently we were out of real butter and she used mine because she though it was “vegan butter”. My entire family just eat chicken made with high quality cannabutter. I have around 45 mins before it kicks in. WHAT DO I DO GUYS?

When people don’t know that they are being dosed with a psychedelic – and let’s be clear, it’s most certainly a psychedelic when you eat cannabis and especially “high quality” stuff. 11-hydroxy-THC is said to be 10x as potent as delta-9-THC. In other words, eating it is about 10x more potent than smoking it and depending on the quality of the weed – that could mean a seriously potent trip

Edit -Sorry about the typo in the title I was in a hurry.

Edit 2- Guys I know I can just come clean and tell them. I will if it gets to the point where they are freaking out or something. I’m trying very hard to avoid them ever having to know.

Edit 3- No guys I’m not going to record it and embarrass my family for karma.

At this point, we can see that the OP is struggling with the moral dilemma, tell them that they are drugged or let them come to that conclusion by themselves. If it was me when I was 16, I’d clam up – but these days, I’d let people know, “Shit’s about to get crazy…” and help them prepare for impact.

Edit 4- I think they are starting to feel it. Still haven’t told them anything. I think I am in denial about this whole thing.

Edit 5- My mother just asked me if there was anything wrong with my vegan butter. I decided to tell her it was really old, so they will all just think they have food poisoning or something.

You’ll find out later why he opted to not tell his mother that she is going to be more blitzed than lightning in a dark sky.

Edit 6- I think my sister is asleep. My father is in some kind of trance with a giant smile on his face. He doesn’t seem to be freaking out. My mother on the other hand, is going ape shit and wants to go the hospital. My uncle keeps on trying to talk her out of it, (because no one can drive so we would have to pay for an ambulance).

Edit 7- Wtf guys my uncle is barely affected and laughs his ass off every time he looks at me. I think he knows.

Edit 8- BIG UPDATE. Ok so my uncle definitely knows. He noticed what it was when he ate it, but he didn’t say anything about it for whatever fucking reason intill after everyone ate it. He approached my dad about it, who said he had no idea but that my mom used my “vegan butter”. So my uncle told him what was up, so that is why my father has not been freaking out. My father is slightly more liberal about drugs than I thought, apparently he smoked in high school but still didn’t recognize the taste. He is the type who likes Ronald Regan and Donald Trump so I’m kinda surprised. My father keeps trying to get pissed and scold at me, but the weed is preventing him from being mad for more then 30 seconds. My sister has locked herself in her room since after dinner so I assume/hope she is just sleeping. My mother on the other hand (who 100% has never done any drugs, including alcohol/coffee/cigs) has been freaking out pretty bad. She has been having a intense existential crisis. I can get into more details about that later. She is greening out at this point and just threw up. I’m hoping that she puked some of the THC out. But it could have already absorbed into her body idk. My uncle has been doing a pretty great job at talking her down and convincing her to ride it out (She still thinks it is food poisoning)Some of you guys don’t understand that my mother CAN NOT KNOW SHE TOOK WEED. It would make the situation 100x worse. I will keep you guys updated if anything interesting happens.

And there you have it, the Uncle knew! Now that’s a plot twist. I think the experience with the dad might actually have brought them together. I remember my dad telling me, after catching me with pot for years, “Just don’t tell your mom!” As it turned out, he was wrong. At age 60 my mother dropped acid with me. She was willing to change her ideas, which is another lesson I learned – don’t assume your parents are as conservative as you think they are.

Of course, some people are trapped beneath dogma and sometimes ignorance is the best for their general wellbeing.

Edit 9- Just to make to clear everything up

My dad knows because my uncle told him.

My uncle knows because he is a fucking pothead

Mother is feeling better, She is just laying down on her bed at this point. She had some kind of epiphany about how boring her life is and how she wish she never gave up on doing art work etc etc. She got sick for awhile but appears better now.

AND FOR THE 1000TH TIME MY MOTHER CAN NOT KNOW SHE TOOK WEED. ME,MY UNCLE, AND MY DAD ALL DECIDED THAT IS AN AWFUL IDEA. SHE HAS NO IDEA WHAT WEED IS. ALL SHE KNOWS ABOUT IT IS FROM REEFER MADNESS ERA SHIT. IT WILL DEFIANTLY FREAK HER OUT WAY WAY WORSE IF SHE KNEW.

Agreed, for some people it would shatter their world. It’s probably best to let her continue to believe that she was food poisoned or something of the sorts. Perhaps, at some point down the line, she could be told but in the meanwhile, her entire identity is based on Raeganisms…meaning she’s pretty locked into the Don’t Do Drugs Mantra.

Please let this be a cautionary tail to NEVER have your drugs in the family fridge.

Edit 11- I will try to update in a couple days about all the aftermath/more detail. Me and my uncle decided to eat the rest of the cannabutter. So I won’t update here unless something especially crazy happens.

Edit 12- Ok guys I added spaces between sentences, and no I’m not a vegan.

Yes, this is a cautionary tale – if you do leave drugs in the fridge, be sure to mark it properly. A label like “THIS SHIT WILL GET YOU ZONKED!” would suffice. Additionally, don’t be an asshole like I was in my youth and dose people because of “reasons”. There is never a good reason to dose someone without their consent. I believe in the individual’s right to choose and if you rob them of that choice…you’re kind of an asshole.

THE ACCIDENTAL CANNABIS DOSING – LIFE COULD HAVE BEEN WORSE?

Our Cannabis Business Insurer Denied Our Claim. What’s Next?