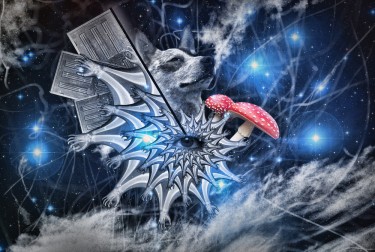 Over the years I have had some life-altering psychedelic experiences, from dropping acid in the middle of a hurricane to drinking a concoction of peyote for a week – I have taken a plunge into the deep of psychedelia.

While every trip is unique and sometimes scary, some trips mark you for life. One of these trips happened to me while I was road tripping in the Mountains of Oaxaca Mexico to a little place called San Jose del Pacifico.

Technically, I was on my way back from the beach, which sat at the foot of the mountain. San Jose sat near one of the peaks of the mountain at 2440 meters (8000ft) above sea level.  To reach the destination you have to drive two to three hours up through a series of mountains on a narrow two-lane highway which often have speeding buses carrying passengers – and in some cases chickens – between the towns scattered everywhere.

Needless to say, the journey towards San Jose is not for those who have a fear of heights. The road, which doesn’t get a lot of maintenance, often have large chunks missing which in turn converts the two lane highway into a one way tight-rope experience. One wrong move and you’ll plummet a few hundred feet on a canopy of pine trees.

After your ears have popped due to the sudden change in atmospheric pressure and once you have successfully driven higher than the clouds – you’ll find San Jose del Pacifico. If you don’t know of its existence, you might drive right through it and never know it was there.

As you drive through town, you’ll notice a few lodgings advertised promising the authentic “cabin” experience. A few rustic restaurants, the houses scattered in the forest – San Jose has “something” alluring to it.

Perhaps it’s the very myth of San Jose that makes it special, or that there are over 300 different species of mushrooms that grow natively in the area. Allegedly, The Beatles tripped in those mountains with Maria Sabina. However, this wasn’t my motivation for going.

A few years earlier, a friend of mine told me about this place in the mountains where you can rent a cabin for cheap, buy mushrooms, opium and weed for next to nothing. He even told me who to meet while I’m there to get the best stuff. A few years later, I was hanging with my wife and she also had been there before – and knew the person who I was referring to.

This settled it, and we both decided to go trip together. We did achieve our goal and tripped a week prior with a group of other travelers. In total, we were about 12 people who went through the full “Mushroom Experience”.

I’ll explain more now how to get the full “Oaxaca Mushroom Experience” below.

While the group experience was “fun” and definitely a beautiful psychedelic trip – I wanted to have a more intimate experience with the substance. I have always had a “pull” towards mushrooms and to this day am fascinated with all kinds…not just the psychedelic ones.

My wife didn’t want to take the journey the second time, but was cool with hanging back and smoking some weed while I trip. It’s just one of the reasons I love that woman!

Nonetheless, after a few hours of snaking up a mountain side and checking into our cabin, I was ready for the trip. I spoke with the guy who was going to do the preparations for the experience and scheduled it for 7 AM the next day.

The day of the Mushroom Trip…

I typically like to take mushrooms on an empty stomach, which is why I scheduled the trip so early. This is because I wasn’t just going to be taking a mushroom trip – I was also going to do a Temascal which is a Mayan sweat-lodge.

It’s an enclosed space, often looking like an igloo of sorts, with a fire pit in the center. After you climb into the space, which is not spacious by any means but also not entirely “cramped” the guide begins loading piping hot stones into the center of the space.

Once the entry way is closed, it become pitch black and temperature quickly begins to climb. This is because for the next 2-3 hours I’ll be taking a concoction of herbs and plants found in the area, and dousing it on the heated river rocks.

This creates steam which fills up the entire pitch black space. Needless to say, it gets HOT in there.

You begin sweating, it gets hard to breathe and all the while, you’re sitting in pitch blackness with only your thoughts and a bucket of “mountain tea”. Every now and then, the guide opens the latch, tosses in another hot stone, and sends me on my journey.

After hours of sweating out the impurities in my body and essentially undergoing a somatic meditation – I crawled out of the darkness like a new born being birthed from mother earth herself. The cold mountain air contrasted on my skin with humid interior of the Temascal, and the subsequent bathing with the mountain tea helped close up my pores.

I wrapped myself with a towel and made myself to the cabin. There, on the table I saw my mushroom tea – prepared. My wife was sitting next to me asking me how it went in the Temascal…I responded, “Good”.

This of course, was an understatement. It’ was fantastic and something I will most certainly repeat at one point or another in my life. Hell, if I can build one someday, I’ll be very happy.

When I was good and ready, I took the mushroom tea and in one chug, downed about 7-8 small psychedelic mushrooms.

There’s one thing you need to know about me. I’m the canary in the coalmine when it comes to psychedelics. I’m typically the first one to feel it usually about 15 minutes after taking whatever it is I’m taking. This doesn’t mean that I’m “peaking”, but rather, I become aware of the effects really quickly.

This time was no different. With Mushrooms, there’s a sense of “nausea” that appears for a moment. At least, this has been a consistent experience whenever I consumed mushrooms.

It’s not unbearable nausea, more like the type of nausea you experience when you’re reading a book in a moving car. Nonetheless, the nausea kicked in round about 15 minutes after taking it and at that point I took a joint and decided to go for a walk.

The thing about tripping on Mushrooms in the woods in San Jose is that you are thousands of feet above sea level, and while it’s easy to climb downwards – the way back up isn’t. Many “trippers” have found themselves stuck on the side of the mountain because while they were tripping they thought it a good idea to explore, only to realize they didn’t bring enough food or water for the way back.

I’m a cautious tripper. I don’t like to put myself in settings where I have little control. And so, I only walked far enough where I could no longer see anybody and could simply be by myself.

Mushrooms is a very “earthy” drug, and when you’re taking the drug in its natural environment, you become intimately connected with your environment. I become friendly with the ground, and enjoyed its touch and smell. I sat down, not caring if I got a bit of dust on me.

To someone on the outside, this probably looked like a deranged madman losing his shit and wallowing in the dirt, however – I was merely going with the flow at that point.

The trip picked up rather quickly in intensity which forced me to have to move to a less “earthy” area. I carefully strolled to this look-out spot the guide took us to earlier, which he claims is one of his favorite. To his credit, it was a magnificent rock on the side of the mountain with zero obstruction.

You could see valleys and clouds and were a few hundred meters away from the very peak. This was going to be the place where I would spend most of my trip. However, I had to make sure I had “stuff” so I could enjoy the moment to its fullest.

And so, I stumbled my way back to the cabin.

By the time I made it back to the cabin, the exercise made my heart pump and suddenly I was in full psychedelia. I saw my wife who was talking to the guide and simply pointed to the water and some food, and a chair I could take. They understood.

And with that, I left with a bit of weed, some water and some nuts and made my way back to the rock. By this time, I was in full trip.

As I sat there in my fold out chair on a rock on the side of a mountain, I began noticing hallucinations happen in the “space between” things. For example, if there were branches, the trip was happening on the space between the branch and the tree.

I continued to see Mayan figures of people and animals dance in the “in between spaces”. I sat there and wondered what it all meant and whether or not I was merely witnessing the spirit of the forest. Eventually, I noticed some clouds form a halo above me…

The halo merged with the sun and I could see fire emerge from the exterior of the halo flaming towards the center. I laid down flat on my back in complete awe of the majesty I was witnessing. I may not have understood consciously what was going on – but to my soul it felt as if I was witnessing some holy moment.

I thought to myself, “Perhaps this was what Moses saw when he went up that mountain and came back with etchings on stones…”

Eventually, the Halo disappeared and what was left was a moment I can only describe as the “Great Big Blob”.

As I was lying there, immersed in one of the most vivid psychedelic experiences of my life, my perspective shifted completely. I no longer saw the empty space as empty, but rather a soup of molecules all vibrating at different frequencies that created the illusion of matter.

Like pixels on a screen, though we appear to be “separate” this is merely the illusion of who we are in time and space. Yet, ultimately we are all a part of this cosmic soup of an existence, to what my conscious mind assigned the term, “The Great Big Blob”. 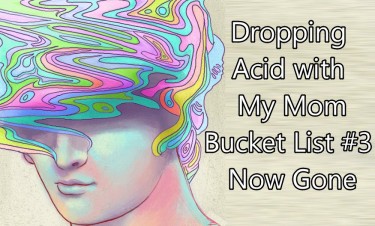 DROPPING ACID WITH MY MOM – NOW OFF MY BUCKET LIST!